In their new study, researchers tested three types of PEEK implants in a rabbit model.

Researchers have developed a technique for coating polymer implants with a bioactive film that significantly increases bonding between the implant and surrounding bone in an animal model. The advance could significantly improve the success rate of such implants, which are often used in spinal surgeries. The work was done by researchers at North Carolina State University, the University of Cambridge and the University of Texas at San Antonio.

The polymer in question is called polyether ether ketone, or PEEK, which has mechanical properties similar to bone, making it attractive for use in spinal implants. However, PEEK doesn't bond well with bone. To that end, researchers had previously developed a technique for coating PEEK with a substance called hydroxyapatite (HA), which is a calcium phosphate that bonds well with bone. Proof-of-concept studies were promising, but researchers were then only able to apply the HA coating to flat surfaces and had not tested HA-coated implants in an animal model. 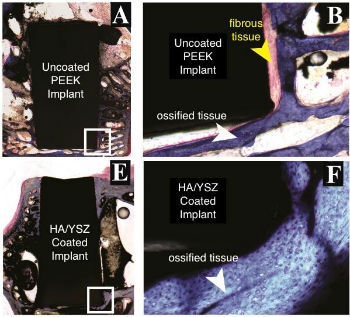 Histological evaluation of bone growth against the non-coated PEEK implants (A and B) and coated PEEK implant using our Ion Beam Assisted Deposition followed by the Microwave heat treatment and a final autoclaving (E and F) after 18 weeks of implantation in a rabbit model. The new bone in contact with the implant surface appeared to be much thinner in the uncoated PEEK group at 18 weeks (B) compared to the new bone formed in contact with the (F) coated implants at the same time. White arrow point at ossified (Indicating new bone formation) and yellow arrow point at the fibrous tissue (indicating scar-like tissue), implant marked by 'I'. Scale bar 9 mm (A,E); 500 μm (B,F). (Credit: Afsaneh Rabiei)
"We can now use our technique to coat the entire surface of an implant, and testing HA-coated implants in an animal model has given us very promising results," said Afsaneh Rabiei, a professor of mechanical and aerospace engineering at NC State and corresponding author of a paper on the work.

The first step of the HA-coating technique—which was developed in Rabiei's lab—coats a PEEK implant with a thin film of yttria-stabilized zirconia (YSZ). The second step applies a coating of HA. The researchers then heat the HA layer using microwaves. The YSZ layer acts as a heat shield, preventing the PEEK from melting. Meanwhile, the heat gives the HA a crystalline structure that makes it more stable in the body, meaning that the calcium phosphate will dissolve more slowly - promoting bonding with surrounding bone.

The researchers used microscopic evaluations of tissue cells and three-dimensional X-ray imaging to assess the performance of all three types of implants. Eighteen weeks after surgery, the researchers found that both types of HA-coated implants had more than double the bone formation of PEEK alone, with comparable bone density. The HA-treated implants also had higher bone-to-implant contact ratios than PEEK alone.

"These results indicated an improved implant fixation in the body, decreasing the chances of loosening of the implant after surgery and the need for revision surgery to remove and replace the implant," Rabiei said. "This improvement is due to increased regenerated bone volume around coated implants compared to uncoated PEEK."

The researchers also did biomechanical testing on the implants, assessing their "toughness," or how well the implant bonded to the surrounding bone.

To test this, the researchers conducted what is called biomechanical push-out testing, in which force is applied to an implant until it is dislodged. These results are measured in terms of work as Newton millimeters (N-mm).

"It is notable that these results were achieved on completely smooth surfaces of PEEK, while our subsequent studies have indicated that by slightly increasing the surface roughness of PEEK prior to coating, we can accomplish even higher adhesion strength of two-layer HA/YSZ coatings that would require even higher work to dislodge," Rabiei said.

"Whether looking at bone growth or toughness, HA-coated samples outperformed uncoated PEEK implants," Rabiei said. "This treatment will probably increase the cost of an implant marginally, but should help minimize the need for follow-up surgeries—which means HA-treated implants will more than pay for themselves over time."

"And the extent of the cost increase remains unclear," Rabiei added. "We are not aware of any health risks associated with HA or YSZ—both of which are used in devices already approved by the FDA for long-term implantation. As a result, we may not need additional clinical trials before HA-coated implants can be used in clinical practice. We're investigating that now, and are looking for industry partners to help us commercialize the technique."
Related Searches