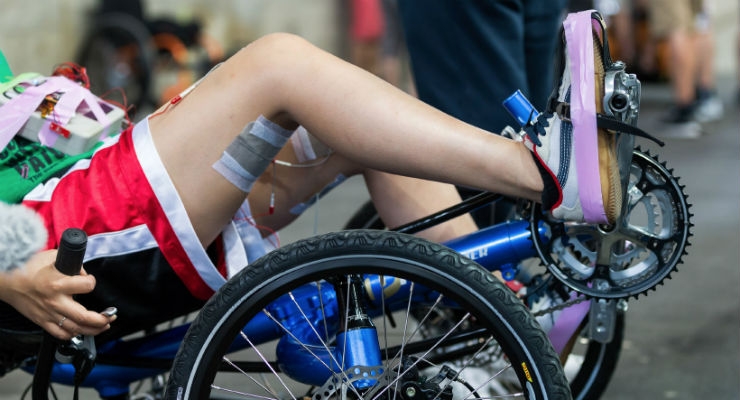 Four men and a woman from across the United States, who are paralyzed below the waist, will race on recumbent trikes at the Cleveland Heights Recreation Center at the Team Cleveland Cybathlon Trials, Tuesday, July 26.

The racers, or pilots as they’re called, are vying for two spots to travel to the international Cybathlon, a version of the Olympics for technology-assisted competitors, in Zurich, Switzerland.

All of the pilots in the Cleveland trials employ neural stimulation systems to power themselves around a track.

“An implanted neural stimulator can activate up to 16 muscle groups,” explained Ronald Triolo, a professor of orthopaedics and biomedical engineering at Case Western Reserve and executive director of the Advanced Platform Technology Center at the Stokes Cleveland VA.

“It was developed by the VA and Case Western Reserve and consists of a surgically implanted pulse generator and electrodes inserted into the muscles near the motor nerves, or wrapped around them,” Triolo said. “There's an external controller that communicates with the implant by radio waves transmitted through the skin by an antenna taped to the skin.”

A simple encoder senses where the pedal crank is and turns the right muscle on at the right time to propel the bike forward, he said.

Triolo, who leads the team supporting the pilots, agreed to enter the competition “to encourage the development of all sorts of assistive technologies and educate the public about their potential to impact the lives of people with disabilities,” he said.

Plus, he thought it would be fun for the pilots and their support team, who have continued to conduct research sponsored by the VA, National Institutes of Health and Department of Defense while they've trained and prepared for the competition over the past year.

The five pilots maintain active lives following their spinal cord injuries. They are: Each pilot will ride two time trials on an oval track laid out inside the Cleveland Heights Community Center at Monticello Boulevard and Mayfield Road.

Riders with the top two times will advance to the Cybathlon, Oct. 8. They’ll compete in 750-meter races on an oval track in Zurich.

The competitions and demonstrations at the Cybathlon are aimed at facilitating discussion between academia and industry as well as technology developers and people with disabilities, and to promote the use of robotic assistive aids to the general public.