Cybathlon was intended to drive forward the development of prostheses and other types of assistive aids. 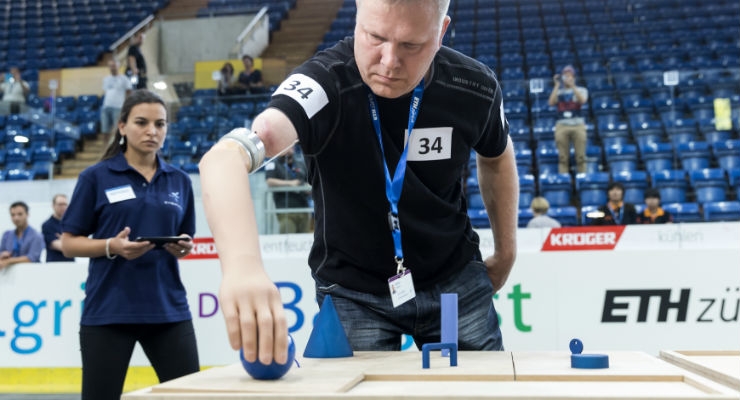 A few years ago, a patient was implanted with a bionic arm for the first time in the world using control technology developed at Chalmers University of Technology. He now took part in Cybathlon, a new international competition in which 74 participants with physical disabilities competed against each other, using the latest robotic prostheses and other assistive technologies—a sort of “Cyborg Olympics.”

The Paralympics will now be followed by the Cybathlon, which took place in Zürich on October 8th. This was the first major competition to show that the boundaries between human and machine are becoming more and more blurred. The participants competed in six different disciplines using the machines they are connected to as well as possible.

Cybathlon was intended to drive forward the development of prostheses and other types of assistive aids. Today, such technologies are often highly advanced technically, but provide limited value in everyday life.

Magnus, one of the participants, has now had his biomechatronically integrated arm prosthesis for almost four years. He says that his life has totally changed since the implantation, which was performed by Dr. Rickard Brånemark, associate professor at Sahlgrenska University Hospital.

“I don’t feel handicapped since I got this arm,” said Magnus. “I can now work full time and can perform all the tasks in both my job and my family life. The prosthesis doesn’t feel like a machine, but more like my own arm.”

Magnus lives in northern Sweden and works as a lorry driver. He regularly visits Gothenburg in southern Sweden and carries out tests with researcher Max Ortiz Catalan, assistant professor at Chalmers University of Technology, who has been in charge of developing the technology and led the team competing in the Cybathlon. 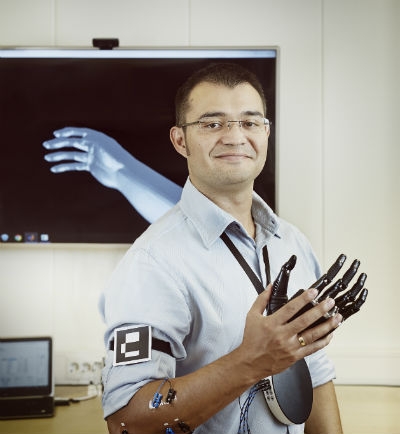 Dr. Max Ortiz Catalan demonstrating one of his lab´s bioelectric systems for the intuitive control of prosthetic and virtual arms. (Credit: Anna-Lena Lundqvist)
“This is a completely new research field in which we have managed to directly connect the artificial limb to the skeleton, nerves and, muscles,” said Dr. Max Ortiz Catalan. “In addition, we are including direct neural sensory feedback in the prosthetic arm so the patient can intuitively feel with it.”

Today Magnus can feel varying levels of pressure in his artificial hand, something which is necessary to instinctively grip an object firmly enough. He is unique in the world in having a permanent sensory connection between the prosthesis and his nervous system, working outside laboratory conditions. Work is now under way to add more types of sensations.

At the Cybathlon he competed for the Swedish team, which was formed by Chalmers University of Technology, Sahlgrenska University Hospital, and the company Integrum AB.

The competition has a separate discipline for arm prostheses. In this discipline Magnus completed a course made up of six different stations at which the prosthesis will be put to the test. For example, he had to open a can with a can opener, load a tray with crockery, and open a door with the tray in his hand. The events at the Cybathlon were designed to be spectator-friendly while being based on various operations that the participants have to cope with in their daily lives.

“However, the competition will not really show the unique advantages of our technology, such as the sense of touch and the bone-anchored attachment which makes the prosthesis comfortable enough to wear all day,” said Max Ortiz Catalan.
Magnus is the only participant with an amputation above the elbow. This naturally makes the competition more difficult for him than for the others, who have a natural elbow joint.

“From a competitive perspective Cybathlon is far from ideal to demonstrate clinically viable technology,” said Max Ortiz Catalan. “But it is a major and important event in the human-machine interface field in which we would like to showcase our technology. Unlike several of the other participants, Magnus will compete in the event using the same technology he uses in his everyday life.”

The Opra Osseointegration team is a multidisciplinary team comprising technical and medical partners. The team is led by Dr. Max Ortiz Catalan, assistant professor at Chalmers University of Technology, who has been in charge of developing the technology in close collaboration with Dr. Rickard Brånemark, who is a surgeon at Sahlgrenska University Hospital and an associate professor at Gothenburg University. Dr Brånemark led the team performing the implantation of the device. Integrum AB, a Swedish company, complements the team as the pioneering provider of bone-anchored limb prostheses.
Related Searches